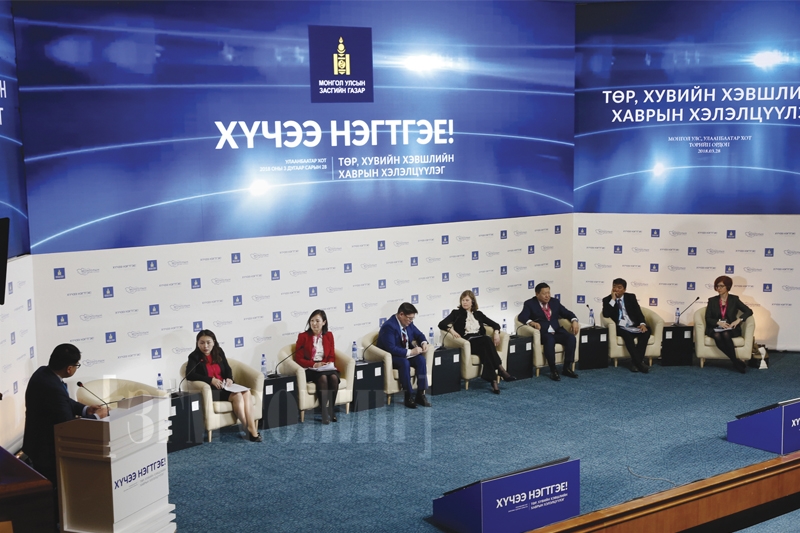 Mongolia's Public and Private sector pledge to cooperate for prosperity

Three-Pillared Development Policy presented at the Public and Private Discussions, the first stage of Mongolia Economic Forum, aims to improve living standards by reforming socio-economic policy and public governance, as well as by creating 263 thousand workplaces before 2020. In order to achieve this, the policy is prioritizing the development of agriculture, mining and tourism sectors. The main policy in the mining sector will be to create environment for distributing dividends to the public by activating major deposits into economic circulation. The three-pillared development policy is also addressing the expansion of trade and tourism by developing infrastructure. Prime Minister Khurelsukh Ukhnaa highlighted the importance of supplying 100 percent of food and electricity demand domestically, which are interlinked with the Coal miners' export price varies significantly MINING The third financing of the Extended Fund Facility (EFF) program implemented by the Government of Mongolia and International Monetary Fund (IMF) is expected to be settled at the meeting of Executive Board of IMF today. Accordingly, the board will conduct the performance review of EFF program, which has been implemented for over a year, to decide on the third financing. After the previous review SDR 55.9 million fund or USD 79.1 million was enabled by the IMF. The successful implementation of the program will allow for an amount equivalent to SDR 314.5 million, or about USD 434.3 million.
The IMF staff team conducted discussions on the third review of the three-year Extended Fund Facility in February and concluded that Mongolia’s economy is doing better than expected led by commodity exports and a pick-up in domestic demand. They also warned the growth outlook is subject to risks including a fall in external demand for commodities and higher fuel prices. Thus, the team noted it is essential that the authorities continue to build buffers and implement the structural reforms necessary for high and sustainable growth. In addition, the IMF expects Mongolia’s economy to grow by 5 percent this year and 6.3 percent in 2019. The overall fiscal deficit in 2017 was 1.9 percent of GDP compared to the target of 10.6 percent and 17 percent in 2016. IMF highlighted that fiscal results have been better than expected, supported by stronger revenues and tight expenditure control. The fiscal over-performance has provided some room for adapting program policies including a rise in civil service salaries in 2019 after several years of restraint, informed the IMF staff team in their statement after the visit. national security. The first phase of Mongolia Sustainable Development Vision 2030 is expected to be completed in 2020. By implementing the Three-Pillared Development Policy, the Government plans to increase annual GDP growth to six percent until 2020, GDP per capita to USD 4020 and create 263 thousand workplaces. Economist Khaschuluun Chuluundorj, addressed “Projects in agriculture, industry and infrastructure spheres are implemented with complete economic estimation, over 263 thousand workplaces can be created in the next three years.
If the investments are transferred as scheduled, poverty can be reduced by certain percentage.” Within the frames of the development policy, several major projects, such as Smoke-Free Ulaanbaatar, New Countryside, water recycling, waste treatment plants, oil refinery, infrastructure and power projects are expected to be implemented up until 2020. Presently, a total of 79 investment projects are in plans for the next three years. These will require a total of MNT 20 trillion financing, or annual financing of MNT 6 trillion. On the methods of financing, the Deputy Minister of Finance Bulgantuya Khurelbaatar informed “2018- 2020 Fiscal Framework Statement states to allocate a total of MNT 2.2 trillion from State Budget, foreign loans and aids. The remaining will be raised from public and private sector cooperation.” In order to formulate the Three- Pillared Development Policy, the Government reviewed and merged over 160 development documents, ergo focusing on reducing poverty, which has reached 26.4 percent. After pointing out the significance of cooperation between public and private sectors, the Chief of Cabinet Secretariat Zandanshatar Gombojav announced that no law and regulations will be ratified without negotiating with the private sector.”

Within the frames of Payment System Reform project, the Bank of Mongolia (BoM) implemented a