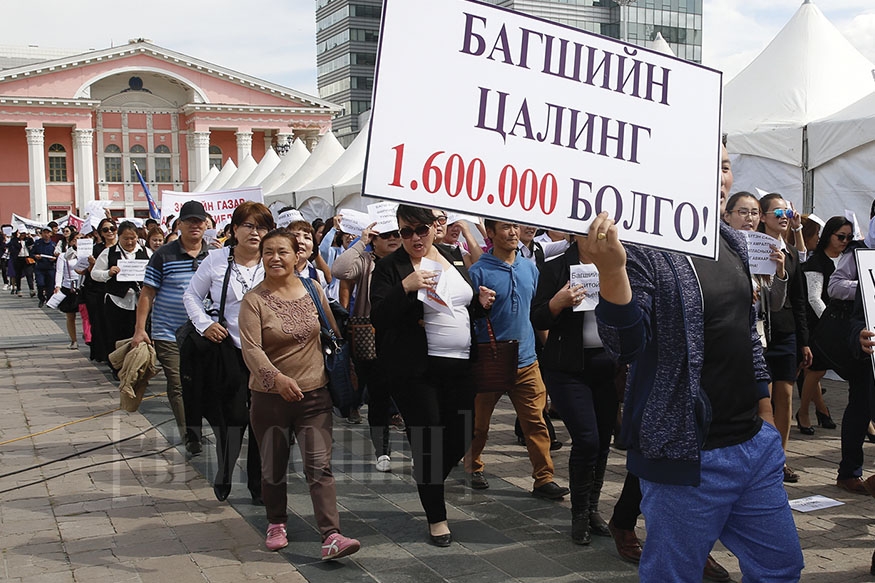 Cabinet decided to raise public servants’ salary by 8-30 percent durings its regular session yesterday; however, teachers and health workers remain unsatisfied with the amount and pledge to strike in September. Since last year, teachers and medical workers staged several protest for their pay and received the Government’s pledge for 50 percent raise, warning to go onto the next stage of strike in September if their demand remains unfulfilled until then. Minister of Labour and Social Protection Chinzorig Sodnom told the press, “The decision excludes ballot positions and prosecutors, and will take effect starting from September 1. First of all, salaries of teachers and medical workers, as well as their equivalent positions and those who get paid lower than them, will be increased by eight percent. We have completed a study, in cooperation with the Ministry of Health, Education, Culture, Science and Sports, to improve the pay levels of civil servants. The study shows that elementary school and kindergarten teachers require the most skills and have the highest pressure.
Therefore, we are raising their pay level by one and nurses’ pay level by one to two. In other words, elementary and kindergarten teachers’ wage will increase by 12.3 percent and nurses’ pay will rise 20-30 percent in September.” The Minister also noted that cultural sector workers get paid 12.5 percent lower than public servants; thus, their pay will increase by 14-30 percent. The Cabinet also discussed the Parliament’s 29th resolution, which prevents any pay raise until 2019, and decided to submit a redraft, along with the 2019 budget amendments. Unpleased with the decision, the head of temporary committee for teachers’ salary raise addressed, “We studied the price changes of consumer goods. The eight percent increase is nowhere near enough. We are fighting to increase teachers’ salaries for a whole year. We will not accept the Government’s attempt to brush-off our demand. The authorities said they presented their proposal to the Trade Union of Education. The union informed us that they did not accept the eight percent increase and left the meeting. Our temporary committee will stand firm on our 50 percent pay raise demand. It is safe to presume teachers will intensify their strike.”
САНАЛ БОЛГОХ
Newspapers to demand revision to Child Protection Law

Daily Newspaper Association (DNA), during its second annual forum on September 13, set forth to

6109
Economy grows 6.3 percent on the back of consumer sector